How to Do Nothing with Nobody All Alone by Yourself: A Timeless Activity Guide to Self-Reliant Play and Joyful Solitude (Paperback) 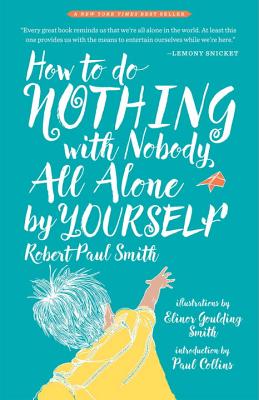 How to Do Nothing with Nobody All Alone by Yourself: A Timeless Activity Guide to Self-Reliant Play and Joyful Solitude (Paperback)

This classic guidebook, with over 100 fully illustrated activities, details everything from paper airplanes to spool tanks to slingshots - teaching children to not only entertain themselves for a minute or two, but a lifetime.

Robert Paul Smith is the author of the best-selling Where Did You Go? Out. What Did You Do? Nothing. and of the novels So It Doesn’t Whistle, The Journey, Because of My Love, and The Time and the Place. Smith was born in Brooklyn, grew up in Mount Vernon, New York, and graduated from Columbia College in 1936. He worked as a writer with CBS Radio.

Paul Collins is a writer specializing in history, memoir, and unusual antiquarian literature. His nine books have been translated into eleven languages, and include Sixpence House: Lost in a Town of Books (2003) and The Murder of the Century: The Gilded Age Crime That Scandalized a City & Sparked the Tabloid Wars (2011). Collins lives in Oregon, where he is chair and professor of English at Portland State University.
Every great book reminds us that we're all alone in the world. At least this one provides us with the means to entertain ourselves while we're here.
— Lemony Snicket

It's what you'd get if you crossed the Boy Scout Handbook with The Anarchist's Cookbook, and it's definitely the wildest how-to manual I've seen this year.
— Greg Cowles, The New York Times Paper Cuts blog

What a joy to give children something they can do without 'hollering for help'...How to Do Nothing with Nobody All Alone by Yourself is replete with the sort of fun that childhood should be, and too rarely is.

Had I known about it, Robert Paul Smith's 1958 book, How to Do Nothing with Nobody All Alone by Yourself, would have been my Bible. Smith gets down to the nitty-gritty on the first page: 'These are things you can do by yourself,' he writes. 'You don't need any help from your mother or your father or anybody.'

This classic 1958 guide reintroduces kids to those natural urges that have to turn random objects into crazy great stuff...Readers will love that everything in this book was invented by kids and passed along by kids, that nothing costs money and that each of the projects is a seat-of-the-pants creation.
— Where the Best Books Are!