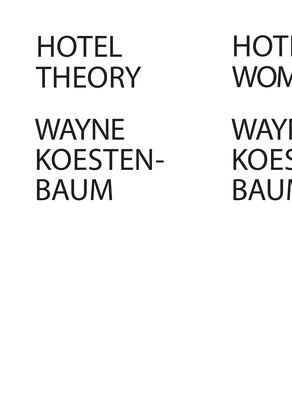 
Should Be On Our Shelves Now! If you need multiple copies, please call or text us
Hotel Theory is two books in one: a meditation on the meaning of hotels, and a dime novel (Hotel Women) featuring Lana Turner and Liberace. Typical of Wayne Koestenbaum’s invigoratingly inventive style, the two books — one fiction, one nonfiction — run concurrently, in twin columns, and the articles “a,” “an,” and “the” never appear. The nonfiction ruminations on hotels are divided into eight dossiers, composed of short takes on the presence of hotels in the author’s dreams as well as in literature, film, and history. Guest stars include everyone from Oscar Wilde to Marilyn Monroe. Hotel Theory gives (divided) voice to an aesthetic of hyperaesthesia, of yearning. It is an oblique manifesto, the place where writing disappears. A new mode of theorizing — in fiction, in fragment, through quotation and palimpsest — arises in this dazzling work.
Wayne Koestenbaum’s twenty books include Camp Marmalade, Notes on Glaze, The Pink Trance Notebooks, My 1980s & Other Essays, Humiliation, Andy Warhol, Jackie Under My Skin, and The Queen’s Throat, a National Book Critics Circle Award finalist. A new edition of his first novel, Circus; Or, Moira Orfei in Aigues-Mortes, was published in 2019. He is a distinguished professor of English, French, and comparative literature at the CUNY Graduate Center in New York. His website is waynekoestenbaum.com.