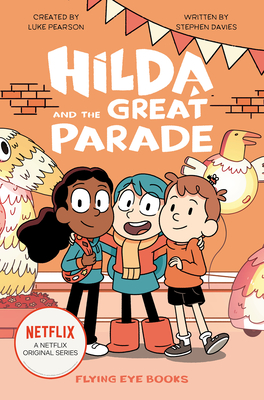 This is book number 2 in the Hilda Tie-In series.

It's tough moving and changing neighborhoods. In this book, Hilda faces new challenges as she moves from the wilderness to the city of Trolberg! As Hilda starts at her new school, she has to adapt to a whole new way of life and make new friends--humans as well as other creatures. Hilda faces all kinds of surprises as she explores the city and faces hordes of people, and learns to find her own space within the crowds.
Luke Pearson is an illustrator and cartoonist who has fast become one of the leading talents of the UK comics scene. He recently worked as a writer and storyboard artist on the cult show Adventure Time. Clients include The New York Times, The Guardian, Cartoon Network, Wired and Disney. He lives in Nottingham.

Stephen Davies has written for The Guardian Weekly and The Sunday Times and is the author of several books for young readers. He lives in London.

Seaerra Miller is an illustrator from Wyoming who studied at the Pacific Northwest College of Art and Design. Since graduating in the spring of 2017, her whimsical and boldly colored work has been commissioned for several publications and organizations such as Cricket Media and Snapchat. She currently lives in Portland, Oregon. She also is the creator of Mason Mooney from Flying Eye Books.

"The action here is nonstop with Hilda being as resourceful as always."—Youth Services Book Review