Maybe the People Would Be the Times (Paperback) 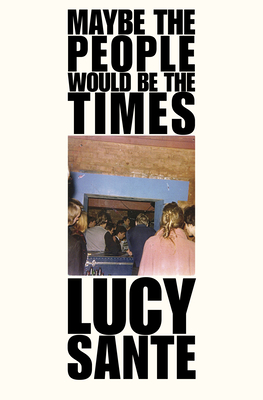 Maybe the People Would Be the Times (Paperback)


Should Be On Our Shelves Now!

In his second collection (after Kill All Your Darlings, 2007), Luc Sante pays homage to Patti Smith, Rene Ricard, and Georges Simenon; traces the history of tabloids; surveys the landscape that gave birth to the Beastie Boys; explores the back alleys of vernacular photography; sounds a threnody for the forgotten dead of New York City.

The glue holding the collection together is autobiography. Every item carries deep personal significance, and most are rooted in lived experience, in particular Sante's youth on the Lower East Side of New York in the fertile 1970s and '80s. He traces his deep engagement with music, his experience of the city, his progression as an artist and observer, his love life and ambitions. Maybe the People Would Be the Times is organized as a series of sequences, in which one piece leads into the next. Memoir flows into essay, fiction into critical writing, humor into poetry, the pieces answering and echoing one another, examining subjects from multiple vantages. The collection shows Sante at his most lyrical, impassioned, and imaginative, a writer for whom every assignment brings the challenge of inventing a new form.

Luc Sante was born in Verviers, Belgium. His other books include Low Life, Evidence, The Factory of Facts, Kill All Your Darlings, and The Other Paris. He is the recipient of a Whiting Award, Guggenheim and Cullman fellowships, an Award in Literature from the American Academy of Arts and Letters, a Grammy (for album notes), and an Infinity Award for Writing from the International Center of Photography. He has contributed to the New York Review of Books since 1981 and has written for many other publications. He is a visiting professor of writing and the history of photography at Bard College and lives in Ulster County, New York