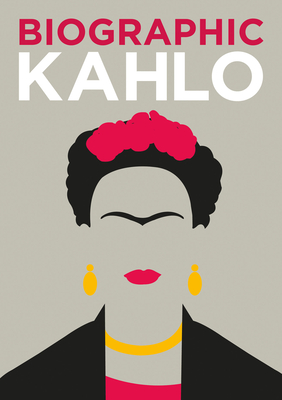 
Should Be On Our Shelves Now! If you need multiple copies, please call or text us
Many people know that Frida Kahlo (1907–1954) was a Mexican artist, a feminist icon who lived in the famous Blue House and whose work includes The Two Fridas. What, perhaps, they don’t know is that 55 of her 143 artworks are self-portraits; that her painting Roots holds the record for a Latin American artwork, having sold for $5.6 million in 2006; that her love letters sold for $137,000; that she married her husband twice; or that she arrived for her first solo exhibition in an ambulance. This book casts a modern eye over her life and work, with an array of irresistible facts and figures converted into infographics to reveal the artist behind the pictures.
Sophie Collins has worked in publishing for over 30 years.
“The Biographic Series is an exciting new collection of biographies about some of the world’s greatest thinkers, writers, artists and cultural innovators. Whilst each book could be read cover to cover, readers are more likely to randomly select pages, stopping and pausing to find out more about the subject . . . The infographics are visually appealing and entertaining, perhaps reinvigorating an interest in the subject . . .The legacy of artists, such as Monet and Van Gogh are particularly well documented in their Biographic.” —Armadillo magazine