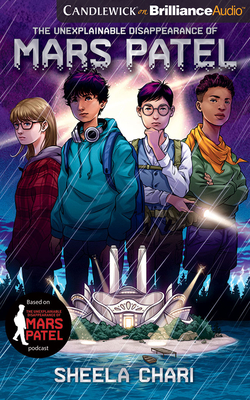 By Sheela Chari, Cassandra Morris (Read by), Michael Perilstein (Read by)
Backordered -- OUT OF STOCK & may take a while

Based on the Peabody Award-winning podcast, this tech-filled adventure series pits intrepid Mars Patel and his outcast friends against a brilliant, enigmatic billionaire as they race to figure out why kids are disappearing from their school.

Mars Patel's friend Aurora has disappeared His teachers are clueless. His mom is stressed out about her jobs. But Mars refuses to give up--after all, his own dad disappeared when Mars was a toddler, before he and Ma moved to Puget Sound from India. Luckily, Mars has a group of loyal friends eager to help--smart Toothpick, strong and stylish JP, and maybe-telepathic Caddie. The clues seem to point toward eccentric tech genius (and Mars's hero) Oliver Pruitt, whose popular podcast now seems to be commenting on their quest But when the friends investigate Pruitt's mysterious, elite school, nothing is as it seems--and anyone could be deceiving them. Slick science, corporate conspiracies, and an endearingly nerdy protagonist make this a fresh, exciting sci-fi adventure.