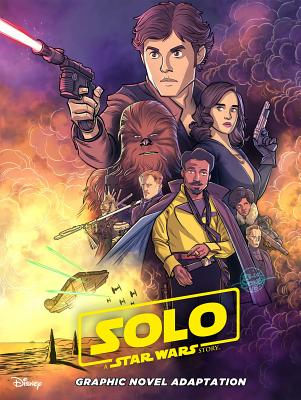 
NOT IN STORE will arrive EARLY 2022
The official all-ages adaptation of SOLO: A Star Wars Story!

There aren't many ways someone like Han, a young scrumrat raised in the streets of Corellia, can leave his planet and become a great pilot, and none of them are easy. But when Han finally makes it, it sets up a life-changing journey that will turn him, and his future co-pilot Chewbacca, into the most famous smugglers in the galaxy.

Capturing the galaxy-spanning action of Solo, experience the movie as a beautiful graphic novel combining the epic wonder of Star Wars with streamlined, young-reader friendly designs. This all-ages graphic novel is a must-read for longtime fans and a great introduction for young newcomers!
Alessandro Ferrari began writing comics for Disney after he attended a script-writing course at the Accademia Disney in Milan in 2005. He's written adventures for Mickey Mouse, Frozen, Pirates of the Caribbean, Witch, and High School Musical. He also adapted numerous films to the graphic novel format, including Wall E, Up, Alice in Wonderland, Frozen, Zootopia, and Finding Dory. Finally, he's written the most recent comic adaptations of the first seven Star Wars films.
"If you know a kid between 6 and 12 years of age, Solo is the Star Wars comic for them. There’s plenty there for older kids, even grown-ups, but younger readers are especially going to have a blast with it. I would especially recommend Solo to people with struggling readers. The story is fun and engaging, and the kind of thing a kid’s going to want to read a hundred times. Sometimes, the right material will ignite a passion for reading in someone, and I think this has that in spades." --Bleeding Cool