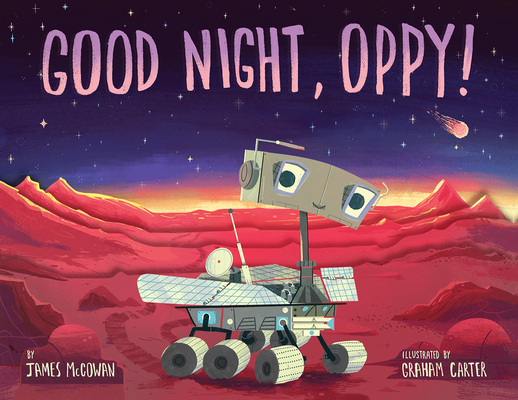 
NOT IN STORE will arrive within 1-2 weeks
Learn all about the Mars Opportunity Rover "Oppy" in this fictionalized account of the space exploration robot's time on the red planet.

Mixing humor with solid space and rover facts, this picture book gives an inside look into Opportunity's time on Mars. An interplanetary detective, Oppy spent 15 years on the red planet taking thousands of pictures and making groundbreaking discoveries that she transmitted to scientists and engineers back on Earth. From joyriding on Olympus Mons, to racing away from a treacherous dust storm, Oppy's adventure in space--combined with her grit and perseverance--will inspire and educate young readers of all ages.
James McGowan is an author and also a literary agent at BookEnds Literary Agency. Good Night, Oppy! is his debut picture book. He lives in Staten Island, NY. Visit jmcgowanbooks.com.

Graham Carter is an illustrator who has worked as the director of an animation studio and had a successful career in commercial illustration, with his prints being exhibited in galleries worldwide. He lives in Seaford, England. Visit graham-carter.co.uk.
"A valedictory tip of the hat to the Opportunity rover...(a) timely addition considering that interest in sending new probes—and people—to the red planet is ramping up." —Kirkus Reviews

"For more than 14 years, the Opportunity rover on Mars followed instructions from NASA scientists and sent back information. McGowan lightly fictionalizes the rover's story, while Carter’s dynamic digital artwork brings Oppy to life as an appealing character on an important mission. An attractive picture book introducing the Mars Exploration Program." —Booklist

"Inspired by Mars Exploration Rover Opportunity...McGowan’s fictionalized telling describes Oppy’s various duties on the surface of the planet... subtly textured digital spreads have a retro, sherbet-toned palette... this narrative will prove engaging for those interested in robotics and space." —Publishers Weekly