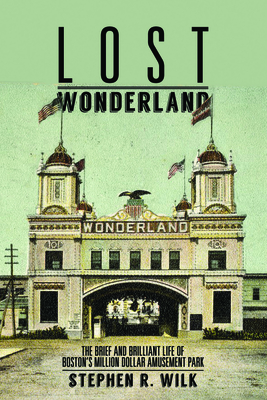 
Should Be On Our Shelves Now! If you need multiple copies, please call or text us
If you take Boston's Blue Line to its northern end, you'll reach the Wonderland stop. Few realize that a twenty-three-acre amusement park once sat nearby—the largest in New England, and grander than any of the Coney Island parks that inspired it. Opened in Revere on Memorial Day in 1906 to great fanfare, Wonderland offered hundreds of thousands of visitors recreation by the sea, just a short distance from downtown Boston.

The story of the park's creation and wild, but brief, success is full of larger-than-life characters who hoped to thrill attendees and rake in profits. Stephen R. Wilk describes the planning and history of the park, which featured early roller coasters, a scenic railway, a central lagoon in which a Shoot-the-Chutes boat plunged, an aerial swing, a funhouse, and more. Performances ran throughout the day, including a daring Fires and Flames show; a Wild West show; a children's theater; and numerous circus acts. While nothing remains of what was once called "Boston's Regal Home of Pleasure" and the park would close in 1910, this book resurrects Wonderland by transporting readers through its magical gates.
STEPHEN R. WILK is a contributing editor to the Optical Society of America and author of How the Ray Gun Got Its Zap: Odd Excursions into Optics. He lives in Saugus, Massachusetts.
"This fascinating account of Revere's Wonderland Amusement Park in the early years of the twentieth century celebrates the industrial achievements of the era—mechanization and the electricity—that brought entertainment to the bourgeoning American middle class."—Maria Olia, author of Discovering Vintage Boston: A Guide to the City's Timeless Shops, Bars, Restaurants & More

"Lively and engaging, the book offers a window into a bit of lost Boston history."—Boston Globe

"Lost Wonderland immerses you in life at the turn of the 20th century . . . mak[ing] the history really pop off the page rather than feeling like some distant memory."—WBUR