Knit Your Own Zoo: Easy-to-Follow Patterns for 24 Animals (Paperback) 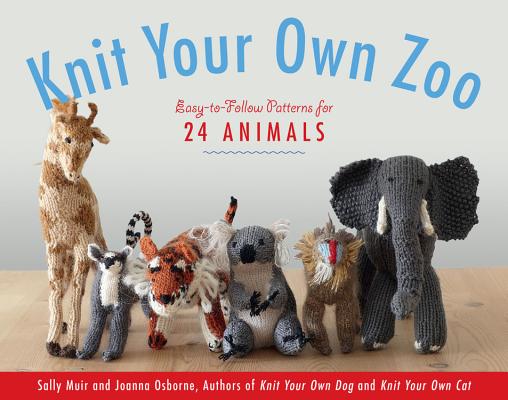 Knit Your Own Zoo: Easy-to-Follow Patterns for 24 Animals (Paperback)

By Sally Muir, Joanna Osborne
List Price: $15.99
Our Price: $11.96
(Save: $4.03 25%)
Should Be On Our Shelves Now!
From the authors of the beloved and best-selling Knit Your Own Dog, Knit Your Own Cat, and Knit Your Own Dog: The Second Litter comes Knit Your Own Zoo! With easy-to-follow, step-by-step instructions for 24 animals, it's an irresistible guide to knitting a single exotic pet or an entire stuffed menagerie.

What could be better than a cuddly koala or a long-necked giraffe to call your own? Knit Your Own Zoo includes patterns for both, as well as a tiger, crocodile, penguin, meerkat, elephant, armadillo, panda, a kangaroo and her joey, and 14 other delightful creatures. The animals are surprisingly easy to make; with a few evenings of work, you can have a covetable companion for life. Given a week, you could be charging admission to your own nature park!

Along with the knitting patterns, Sally and Joanna also include brief descriptions of the various species and offer tips and advice on sewing up and embellishing the animals.

And, of course, these knitted animals are much easier to look after than the real things? They don't eat, won't make a mess, and are legal to keep in your home.
Sally Muir and Joanna Osborne run their own knitwear business, Muir and Osborne (www.muirandosborne.co.uk). They have a shop in London and export their knitwear to stores in the U.S., Japan, and Europe, including Barneys New York, Saks Fifth Avenue, Liberty, and The Cross. They won the U.K. Fashion Export Small Business Award in 2002, and several pieces of their knitwear are in the permanent collection of the Victoria and Albert Museum in London. Their previous books include Knit Your Own Dog, Knit Your Own Cat, Knit Your Own Dog: The Second Litter, and Knit Your Own Zoo.

Muir and Osborne (Knit Your Own Dog, Knit Your Own Cat) have once again assembled a collection of irresistible knitted animals. This book does exactly what it says it does, offering patterns for a veritable menagerie of miniature creatures. Patterns detail familiar animals such as the elephant and crocodile, as well as such less familiar animals as the anteater or meerkat. With the clever use of pipe cleaners, these animals can stand, sit, sprawl, or, in the case of the Fruit Bat, hang from the rafters. Fun details include fringe of all types, from lion manes to orangutan fur, and color work that replicates zebra stripes, leopard spots, and even mandrill coloring, among others. Two mother-and-child duos are especially darling: a seal and pup, and a kangaroo with removable joey. Patterns require focus but are, as described in the book's subtitle, easy to follow. Devotees of knitted creatures will find a lot to love in this collection.