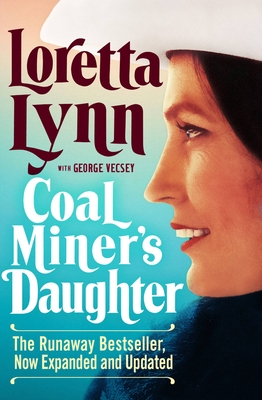 
Should Be On Our Shelves Now!
New York Times bestselling author and Nashville legend Loretta Lynn tells the story of her rise from deep poverty in Butcher Holler, Kentucky, to the top of the male-dominated country music industry.
​
Reissued for the 40th Anniversary of the Oscar-winning, Sissy Spacek-starring film of the same name, Coal Miner's Daughter recounts Loretta Lynn's astonishing journey to become one of the original queens of country music. Loretta grew up dirt poor in the mountains of Kentucky, she was married at thirteen years old, and became a mother soon after. At the age of twenty-four, her husband, Doo, gave her a guitar as an anniversary present.

Soon, she began penning songs and singing in front of honky-tonk audiences, and, through years of hard work, talent, and true grit, eventually made her way to Nashville, the Grand Ole Opry, eventually securing her place in country music history. Loretta's prolific and influential songwriting made her the first woman to receive a gold record in country music, and got her named the first female Entertainer of the Year by the Country Music Association. This riveting memoir introduces readers to all the highs and lows on her road to success and the tough, smart, funny, and fascinating woman behind the legend.
Loretta Lynn is an American country music singer-songwriter whose groundbreaking career spans almost 60 years, with such famous hits as "You Ain't Woman Enough (To Take My Man)" and "Coal Miner's Daughter," as well as a biographical film and book of the same name. With more than 45 million albums sold worldwide, multiple gold albums, and numerous awards and accolades, Loretta is the most awarded female country recording artist and the only female ACM Artist of the Decade. She's known not only for her still-incredible voice, but also for her down-to-earth quality, quick wit, and humor.

"Few subjects are too difficult to deal with here, yet there is nothing sensationalistic. . . Those reading this can be assured they have met the real Loretta Lynn."—Billboard

"Engaging reading even for many to whom country music is an alien world."—The New York Times Book Review