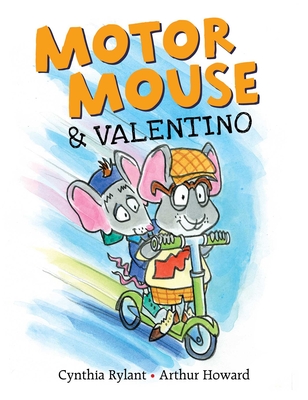 
Coming Soon - Available for Pre-Order Now!
Motor Mouse and his brother, Valentino, are back in three new adventures in this highly entertaining third book in a series from the creators of the Gooseberry Park and the Mr. Putter and Tabby books!

Motor Mouse, a cab-driving mouse on the go, and his dear brother, Valentino, take to the skies, trade motor vehicles, and go to the fair in these new stories!

In “The Flight of Uncertainty,” Motor Mouse is invited to take a ride in a hot air balloon. He isn’t too sure about it until he asks his brother, Valentino, to come along. He always feels braver with Valentino along. So they climb into the balloon basket and away...they...go!

In “A Scooter of One’s Own,” Motor Mouse thinks it’s time for Valentino to learn to drive a car. Valentino doesn’t see the point, since he loves to ride his trusty scooter everywhere. But Motor Mouse convinces him to get behind the wheel. Will Valentino like driving?

In “Assorted Amusements and Prizes,” Motor Mouse and Valentino wake up early for a full day at the Funfair. They play game after game but can’t seem to win any prizes. What to do? Luckily, there are lots of fun rides and yummy treats in store for them!

This sweet and funny trio of stories will have young readers wanting to visit with Motor Mouse again and again.
Cynthia Rylant is the author of more than 100 books for young people, including the beloved Henry and Mudge, Annie and Snowball, Brownie & Pearl, Motor Mouse, and Mr. Putter & Tabby series. Her novel Missing May received the Newbery Medal. She lives in Lake Oswego, Oregon.

Arthur Howard is the illustrator of Goatilocks and the Three Bears by Erica S. Perl; Noodle & Lou by Liz Garton Scanlon; the Mr. Putter & Tabby series, Gooseberry Park series, and Motor Mouse series by Cynthia Rylant; and his own picture books. He has also coauthored and illustrated many books of humor for adults and appeared for seven seasons in the PBS math-oriented production Square One Television. He lives in New York City.