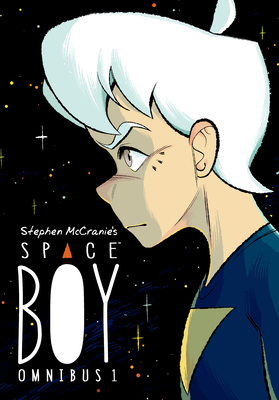 
NOT IN STORE will arrive EARLY 2022
Stephen McCraine’s Space Boy volumes 1-3 in one book!

To Amy, everyone has a flavor. When her dad loses his job on their remote deep space mining colony, Amy and her family are forced to start a new life back on Earth.

Emerging from a cryotube after a 30 year voyage, Amy awakes to find herself in a strange land of heavy gravity, weird people, and an endless blue sky. High school seems difficult at first, but Amy is soon able to settle into a comfortable group of friends that help make the transition easier. But one of Amy’s classmates is different from the others. He’s quieter than most the other kids, more reserved, and strangest of all, he doesn’t have a flavor.

A sci-fi drama of a high school aged girl who belongs in a different time, a boy possessed by emptiness as deep as space, an alien artifact, mysterious murder, and a love that crosses light years.

Stephen McCranie is the writer and illustrator for Space Boy and Mal and Chad, all-ages graphic novel series. Stephen grew up drawing comics from an early age. He eventually earned a Fine Arts degree at the University of New Mexico. Stephen originally created Mal and Chad as a comic strip for the UNM school newspaper.