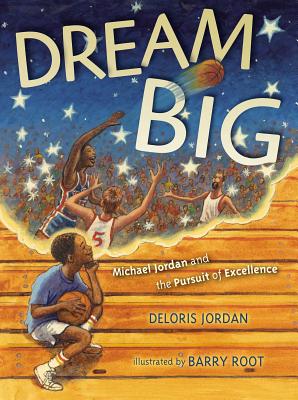 
NOT IN STORE will arrive within 1-2 weeks
Olympic dreams come true in this inspiring picture book from Michael Jordan’s mother, author of the New York Times bestselling Salt in His Shoes.

Long before he became a professional All-Star basketball player, Michael Jordan had dreams of winning an Olympic gold medal—and with dedication and perseverance, that’s exactly what he did. This heartwarming picture book, written by Michael’s mother and illustrated by Barry Root, gives a rare glimpse into a sports hero’s childhood and emphasizes the role that good values play in success. An ideal companion to the New York Times bestselling Salt in His Shoes, this is an inspirational story for sports fans, go-getters, and anyone with big dreams!
Deloris Jordan is Michael Jordan’s mother and the coauthor of Salt in His Shoes and Michael’s Golden Rules, illustrated by Kadir Nelson; Did I Tell You I Love You Today?, illustrated by Shane W. Evans; and Dream Big, illustrated by Barry Root. She is also the author of Family First: Winning the Parenting Game, a book highlighting the seven principles of parenting. Through her work with the James R. Jordan Foundation in Chicago, Illinois, as well as the Jordan Institute for Families at the University of North Carolina at Chapel Hill, Mrs. Jordan is widely regarded as an advocate for children and families. The mother of five children and the grandmother of eleven, Mrs. Jordan lives in Chicago.

Barry Root is the illustrator of many books for children, including Gumbrella, which he also wrote; Dream Big; By My Brother’s Side; and Game Day, which received a Christopher Award in the category of books for young people. He lives with his family in Quarryville, Pennsylvania.
Michael Jordan's mother returns for another story about her famous son's childhood.
Michael Jordan’s childhood dreams were always of playing basketball. His friends, brothers and mother are full of upbeat advice, encouraging him to work hard and keep practicing. After watching the U.S. Olympic team battle Russia, young Michael announces to his mother that he will be an Olympic basketball champion. More pat advice about dreamers and doers follows. But Michael puts his plan into action by asking his coach what he could do now to get closer to that dream. And in an ending that echoes Salt in His Shoes (cowritten with Roslyn Jordan and illustrated by Kadir Nelson, 2000), he goes to his older brother’s scrimmage and makes a three-pointer right over the heads of his opponents. An afterword sums up Michael’s journey to the Olympic Games—the culmination of lots of little steps undertaken day after day. -- Kirkus

This inspirational story focuses on the outside influences surrounding the athlete as a nine-year-old both at home and abroad. When the American basketball team loses its bid for a gold medal to Russia in the 1972 Olympics, young Jordan is watching, along with his brothers. Inspired by the close game, he informs his mother that he is going to be an Olympic champion. Through bits and pieces of conversation and parental admonitions, he learns how to achieve his goal with “a series of small steps.” He is called a dreamer, but proves that he is a doer as well. His mother, his middle-school coach, his brother Larry, and a friend all contribute their words of wisdom that lead him to work toward his goal. The watercolor and gouache illustrations have a warm, almost golden tone that evoke the hovering, seemingly present gold medal. In the author’s note, readers learn that Jordan achieved his goal in 1984. A timely publication just before the 2012 Olympics, this book could be paired with the author’s previous story about her son, Salt in His Shoes (S & S, 2000).–Sara Lissa Paulson, American Sign Language and English Lower School PS 347, New York City
School Library Journal, May 2012