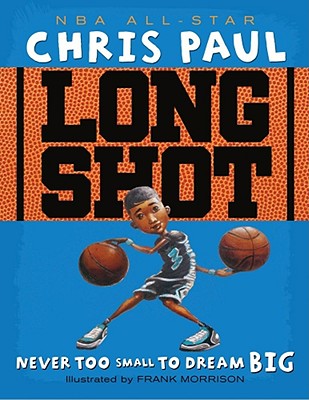 
NOT IN STORE will arrive within 1-2 weeks
Phoenix Suns point guard Chris Paul—NBA All-Star and former Rookie of the year, community activist, and Olympic gold medalist—shares his inspiring story of overcoming impossible odds to achieve his dream of playing professional basketball.

Everybody told Chris that he was too small to play basketball. But he ignored them all...because he had big dreams.
NBA All-Star and former NBA Rookie of the Year Chris Paul plays for the Phoenix Suns.

Frank Morrison is the award-winning illustrator of many books for young readers, including Jazzy Miz Mozetta, winner of the Coretta Scott King - John Steptoe Award for New Talent; Little Melba and Her Big Trombone, a Coretta Scott King Illustrator Honor book; Muhammad Ali; and How Sweet the Sound. Before becoming a children’s book illustrator and fine artist, Morrison toured the globe as a break-dancer. He lives in Georgia with his family.