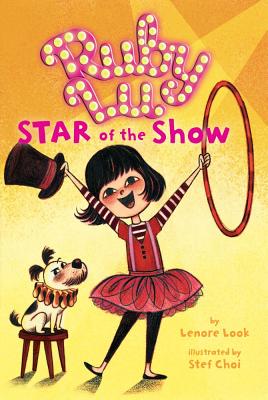 
Should Be On Our Shelves Now! If you need multiple copies, please call or text us
Ruby Lu returns—in paperback! Can this spunky middle-grader solve her family’s money troubles?

Ruby is starting third grade, and she can’t wait! She’ll get to join fun clubs, learn cursive, and play in the orchestra. But there’s one big change Ruby Lu isn’t expecting: Her father loses his job. Now he’s taking care of her and Oscar while her mother works, and it’s definitely not all fun and games, especially with money so tight. So Ruby, determined and resourceful as ever, sets out to make a million dollars! And though she soon learns that making money isn’t easy, she also discovers that having a loving family is the most valuable thing of all.
Lenore Look is the author of Ruby Lu, Brave and True, an ALA Notable Book, as well as its sequels, Ruby Lu, Empress of Everything and Ruby Lu, Star of the Show. Her picture books include Love as Strong as Ginger, illustrated by Caldecott Honor artist Stephen T. Johnson; Henry’s First-Moon Birthday; and Uncle Peter’s Amazing Chinese Wedding, both illustrated by Yumi Heo. She lives in Hong Kong.

Stef Choi illustrated the Ruby Lu series by Lenore Look, and her work has been featured in the books Cartoon Modern by Amid Amidi and Art of Boxtrolls by Philip Brotherton. She has worked as a character designer and illustrator in animation since 2002 at studios such as Disney, Cartoon Network, Nickelodeon, and LAIKA. She lives in Los Angeles, California.
“Ruby is as effervescent and charming as ever.”—Booklist

“Leavening the seriousness of her family’s money worries is Ruby’s Ramona-like talent for getting into trouble. (Young readers will think of Lilly and her purple plastic purse when Ruby’s beloved third-grade teacher Mr. Yu sends home a letter about her bad grades—Ruby draws a picture of him being struck by lightning, then features him in a less-than-flattering haiku.) Ruby and her family, along with cousin Flying Duck and the rest of the 20th Avenue Plum Club, are as comfortably familiar—and entertaining—as ever.” –The Horn Book

“Although the overall tone is lighthearted, Look provides some real insight into the struggles a family faces when its main breadwinner is out of work, and she resists providing an easy resolution. Fans of Sara Pennypacker’s Clementine and Katy Kelly’s Lucy Rose should definitely meet Ruby Lu.” –Kirkus Reviews