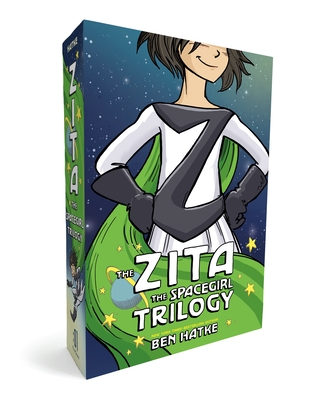 This sturdy boxed set includes the paperback editions of the three Zita the Spacegirl books and an exclusive poster by New York Times–bestselling author/illustrator Ben Hatke.

Don a cape and follow the indomitable space explorer Zita from start to finish! From her unlikely origin as a humble earth girl to her wildest spacefaring adventures—robot doppelgängers, space whales, doomsday cults—it's all here in one deluxe package.

Zita was an ordinary little girl, once -- not that long ago, actually. Okay, yesterday. But sometimes things can change awfully fast.

Legends of Zita the Spacegirl

Zita is determined to find her way home to earth, following the events of the first book. But things are never simple, and certainly never easy, in space.

The Return of Zita the Spacegirl

Zita the Spacegirl has saved planets, battled monsters, and wrestled with interplanetary fame. But she faces her biggest challenge yet in the third and final installment of the Zita adventures.

Ben Hatke is the author and illustrator of the New York Times–bestselling Zita the Spacegirl trilogy, the picture books Julia's House for Lost Creatures and Nobody Likes a Goblin, and the graphic novels Little Robot and Mighty Jack. He lives and works in the Shenandoah Valley with his wife and their boisterous pack of daughters.