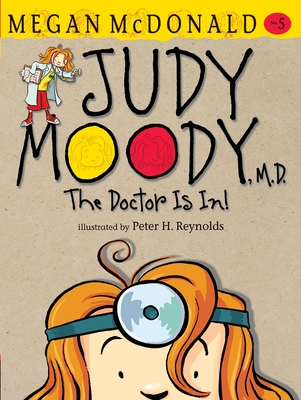 By Megan McDonald, Peter H. Reynolds (Illustrator)
Backordered -- OUT OF STOCK & may take a while

This is book number 5 in the Judy Moody series.

Judy gets a taste of her own medicine in a hilarious new episode sure to tickle your humerus (aka funny bone) and put you in a very Judy Moody mood!

Judy Moody has a mood for every occasion, and now, she, Judy Moody, is in a medical mood! It's no secret that Judy wants to be like Elizabeth Blackwell, first woman doctor, when she grows up. So when Class 3T starts to study the Amazing Human Body, Judy can hardly wait to begin her better-than-best-ever third-grade projects: show-and-tell with something way rarer than a scab, a real-live ooey-gooey operation, and a cloning experiment that may create double trouble for Judy and her friends. RARE!

Megan McDonald is the author of the award-winning Judy Moody series as well as a companion series starring Judy's brother, Stink. She is also the author of the novel The Sisters Club, as well as Ant and Honey Bee, illustrated by Brian Karas. She lives in Sebastopol, California.

Peter H. Reynolds is the illustrator of all the Judy Moody and Stink books. He is also the author-illustrator of the picture books The Dot, Ish, So Few of Me, and The North Star. He lives in Dedham, Massachusetts.

[McDonald] finds ample comedy in the way children mishear words and mangle information [and] Reynolds' buoyant sketches depict Judy's ups and downs in this fifth book of a series that proves laughter can be contagious.
—Booklist

Brings back the irrepressible heroine as her class studies the human body.
—Publishers Weekly

The author's humor and language are right on target. . . . As always, there are facts to be learned and loads of puns and playful language to entertain readers. This is another winner.
—School Library Journal