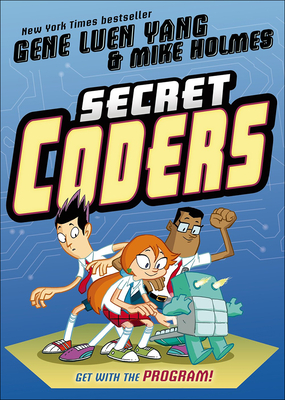 This is book number 1 in the Secret Coders series.

Welcome to Stately Academy, a school which is just crawling with mysteries to be solved The founder of the school left many clues and puzzles to challenge his enterprising students. Using their wits and their growing prowess with coding, Hopper and her friend Eni are going to solve the mystery of Stately Academy no matter what it takes

Gene Luen Yang has written and drawn many comics, including the hit "Avatar: The Last Airbender" series. "American Born Chinese" was a National Book Award finalist, as well as the winner of the Printz Award and an Eisner Award. He also won the "LA Times" Book Prize for "Boxers & Saints." Yang lives in the San Francisco Bay Area.Mike Holmes has drawn for the comics series Bravest Warriors, Adventure Time, and the viral art project Mikenesses. His books include the "True Story" collection (2011), "This American Drive" (2009), and "Shenanigans." He lives with a cat named Ella, who is his best buddy.