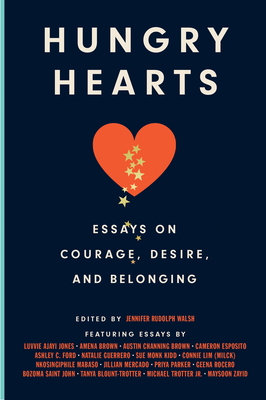 
NOT IN STORE will arrive within 1-2 weeks
Sixteen innovators, creatives, and thought leaders—Austin Channing Brown, Sue Monk Kidd, and Luvvie Ajayi Jones, among others—share intimate stories of uncovering beauty and potential through moments of fear, loss, heartbreak, and uncertainty.

“You’ll find kindred spirits in these tales of resilience, transformation, and joy.”—Time

Over the course of four years, the traveling love rally called Together Live brought together diverse storytellers for epic evenings of laughter, music, and hard-won wisdom to huge audiences across the country. Well-known womxn (and the occasional man) from all walks of life shared their most vulnerable truths in a radical act of love, paving the way for healing in the face of adversity.

Now, off the stage and on the pages of Hungry Hearts, sixteen of these beloved speakers offer moving, inspiring, deeply personal essays as a reminder that we can heal from grief and that divisions can be repaired. Bozoma Saint John opens herself up to love after loss; Cameron Esposito confronts the limits of self-reliance in the wake of divorce; Ashley C. Ford learns to trust herself for the first time. A heartfelt anthology of transformation, self-discovery, and courage that also includes essays by Luvvie Ajayi Jones, Amena Brown, Austin Channing Brown, Natalie Guerrero, Sue Monk Kidd, Connie Lim (MILCK), Nkosingiphile Mabaso, Jillian Mercado, Priya Parker, Geena Rocero, Michael Trotter and Tanya-Blount Trotter of The War and Treaty, and Maysoon Zayid, Hungry Hearts shows how reconnecting with our own burning, undeniable intuition points us toward our unique purpose and the communities where we most belong.
Jennifer Rudolph Walsh has sat at the nexus of entertainment and media for nearly thirty years. She was WME’s sole female board member and global head of its literary, lectures, and conference divisions, and she represented such luminous clients as Oprah Winfrey, Brené Brown, Alice Munro, and Sue Monk Kidd. In 2016, she co-founded Together Live, a traveling intersectional women’s tour driven by the mission of finding purpose and community through authentic and heartfelt storytelling. Over four years, the tour visited thirty-five cities, lit over fifty thousand souls on fire, and produced three seasons of a widely streamed podcast. She serves as a board advisor to SeeHer, the National Book Foundation, and her alma mater, Kenyon College. After a lifetime in New York City, Jennifer relocated to San Francisco to walk beneath the redwoods with her family and three dogs.
“Sue Monk Kidd! Ashley C. Ford! Cameron Esposito! Bozoma Saint John! The gang’s all here—in this book of essays, 16 writers reflect movingly on all different ways to be in loving relationships. If you are looking for a little bit of gentleness, a warm word from writers you can trust, well, here it is.”—Glamour

“This gem of a collection includes deeply personal, restorative, and funny essays by some magical people: Amena Brown . . . on her period playlist, Cameron Esposito on the horrors of fitting in and group fitness, Ashley C. Ford on what can come after heartbreak, Austin Channing Brown on the time the word ‘ambitious’ hit differently, Priya Parker on the wisdom of a group and the wisdom of the self, Jillian Mercado on losing and gaining your freedom, Natalie Guerrero on dismantling silence, and more.”—goop

“Each essay is infused with sincerity and introspection, creating a connection with readers as the contributors reveal their vulnerabilities with candor and emotion. . . . A cathartic collection with broad appeal.”—Kirkus Reviews