Vivian Apple at the End of the World (Hardcover) 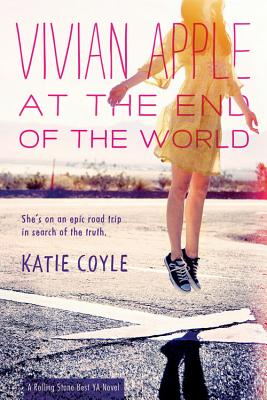 Vivian Apple at the End of the World (Hardcover)

By Katie Coyle
Out of Print - Not Available
Seventeen-year-old Vivian Apple never believed in the evangelical Church of America, unlike her recently devout parents. But when Vivian returns home the night after the supposed "Rapture," all that’s left of her parents are two holes in the roof. Suddenly, she doesn't know who or what to believe. With her best friend Harp and a mysterious ally, Peter, Vivian embarks on a desperate cross-country roadtrip through a paranoid and panic-stricken America to find answers. Because at the end of the world, Vivan Apple isn't looking for a savior. She's looking for the truth.
Katie Coyle grew up in Fair Haven, New Jersey, and has an MFA from the University of Pittsburgh. Her short fiction has appeared in One Story, The Southeast Review, Cobalt, and Critical Quarterly.

“Have you ever read a book that made you want to be a braver person, one that is beautiful and scary and funny and heartbreaking and genuinely weird all at once? [This] is that kind of book.”
—Rookie

“Smart, well-written, with great characters, this book will leave you thinking long after you turn the last page.”
—Justine

“This coming-of-age story mixes in the Rapture, a road trip and a romance, creating an incredibly readable cocktail.”
—Campus Circle

“Vivian Apple at the End of the World offers a penetrating critique of religious intolerance along with a provocative ‘What if?’ — what if the Rapture is real? What happens to everyone left behind?”
—Chicago Tribune

“A thoughtful and earnest work that has much to say about the world we human beings have created and why we must deeply question the faiths we chose.”
—Boston Globe

* “A gritty, often troubling work that is nevertheless infused with humor and heart.”
—Booklist, starred review

“For readers who like their realistic fiction with a whopping side of satire.”
—Kirkus