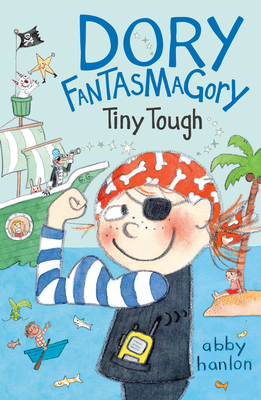 This is book number 5 in the Dory Fantasmagory series.

The fifth adventure in the enormously popular Dory Fantasmagory series takes on the tried-and-true theme of childhood friendships, and turns it on its head, Dory-style.

When her big sister Violet has friend trouble at school, Dory tries to come to her rescue. But Dory's active imagination takes over, and she is sure that Violet's lost treasure (a friendship bracelet) has something to do with pirates. In search of the treasure, Dory meets up with a real pirate crew and finds that a pirate's life is harder than she thought. At sea, Dory longs for her imaginary friend Mary. But Mary has gone off with an exciting new friend of her own and Dory is crushed with jealousy. Just when things can't get any worse, Dory's old enemy, Mrs. Gobble Gracker shows up and Dory's ocean adventure takes a surprising turn.

There's a ton of treasure in Dory's fifth adventure as Dory mixes in pirates, pals (real and make-believe), and her own imagination into one wild and wet free-for-all.
Abby Hanlon has taught creative writing and first grade in the New York City public school system. Inspired by her students' storytelling and drawings, Abby began to write her own stories for children, and taught herself to draw after not having drawn since childhood. She lives with her husband and two children in Brooklyn.