The Quantum Spy: A Thriller (Paperback) 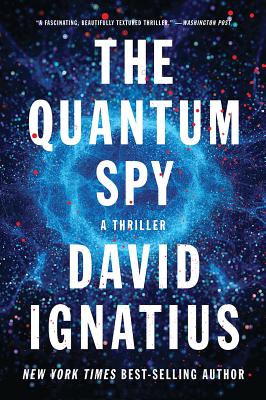 The Quantum Spy: A Thriller (Paperback)

A hyper-fast quantum computer is the digital equivalent of a nuclear bomb; whoever possesses one will be able to shred any encryption and break any code in existence. The question is: who will build one first, the U.S. or China?

In this gripping thriller, U.S. quantum research labs are compromised by a suspected Chinese informant, inciting a mole hunt of history-altering proportions. CIA officer Harris Chang leads the charge, pursuing his target from Singapore to Mexico and beyond. Do the leaks expose real secrets, or are they false trails meant to deceive the Chinese? The answer forces Chang to question everything he thought he knew about loyalty, morality, and the primacy of truth.

David Ignatius is a prize-winning columnist for the Washington Post and has been covering the Middle East and the CIA for four decades. He has written several New York Times bestsellers, most recently The Director. He lives in Washington, DC.
[A] fascinating thriller.… Involving and realistic-seeming.
— Wall Street Journal

A work for now and forever. Couldn’t put it down.
— Michael Hayden, former director of the CIA and NSA

A thrilling window into the future world of high tech espionage.… The names may be fictitious, but what they are fighting about is very real!
— Leon E. Panetta, former director of the CIA and secretary of defense

A fascinating, beautifully textured thriller…For inside dope on the day-to-day work and personal lives among America’s espionage personnel, Ignatius is unbeatable.
— Washington Post

The Quantum Spy is David Ignatius at the top of his game! A truly thrilling, superbly crafted spy novel that focuses on pivotal contemporary issues—the competition to achieve quantum computing technology, the high-stakes rivalry between the U.S. and China, and the conduct of spycraft in a digital age.

— General (Ret.) David Petraeus, former director of the CIA (2011–2012), commander of the surge in Iraq, and commander of coalition forces in Afghanistan