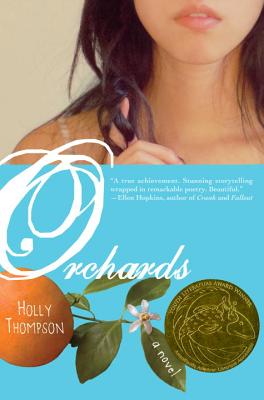 After a classmate commits suicide, Kana Goldberg—a half-Japanese, half-Jewish American—wonders who is responsible. She and her cliquey friends said some thoughtless things to the girl. Hoping that Kana will reflect on her behavior, her parents pack her off to her mother's ancestral home in Japan for the summer. There Kana spends hours under the hot sun tending to her family's mikan orange groves.
Kana's mixed heritage makes it hard to fit in at first, especially under the critical eye of her traditional grandmother, who has never accepted Kana's father. But as the summer unfolds, Kana gets to know her relatives, Japan, and village culture, and she begins to process the pain and guilt she feels about the tragedy back home. Then news about a friend sends her world spinning out of orbit all over again.

HOLLY THOMPSON was raised in New England, earned her B.A. in biology from Mount Holyoke College and her M.A. in English from New York University. A long-time resident of Japan, she teaches creative writing at Yokohama City University.

Starred Review, School Library Journal, March 2011:
"Thompson has crafted an exquisite, thought-provoking story of grief and healing that will resonate with teen readers and give them much to discuss."

Review, Publishers Weekly, January 3, 2011:
“Eloquently captures a teenager’s anger, guilt, and sorrow after a classmate takes her own life. . . . Understated yet potent verse.”

Review, Booklist, January 1, 2011:
“Readers will want to talk about the big issues, especially the guilt of doing nothing.”

Review, VOYA,
“Compelling. . . . Teens who enjoy learning about other cultures will relish Thompson’s ability to evoke the sights, smells, and tastes of Japan, while poetry fans will enjoy the novel’s unique format.”

Review, The Winston-Salem Journal, March 20, 2011:
"This lyrical look at bullying and the afterschocks of suicide may be gut-wrenching, but Orchards is crafted with a sensitive beauty."