Dragon of the Red Dawn (Hardcover) 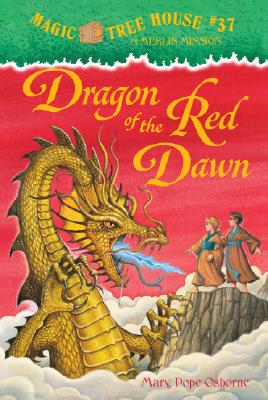 Dragon of the Red Dawn (Hardcover)

This is book number 37 in the Magic Tree House series.

Merlin the Magician will not eat or sleep or speak to anyone in Camelot. What can be done? The enchantress Morgan knows who to ask
for help: young Jack and Annie of Frog Creek, Pennsylvania! The brother-and-sister team quickly head off in the magic tree house on another magical and historical adventure.

Their mission: discover one of the four secrets of happiness.

Their journey: to a land of fierce samurai and great beauty, the capital city of Edo (now the city of Tokyo), in ancient Japan in the 1600s.

Their tools: a research book to guide them and a magic wand with three special rules.

In Dragon of the Red Dawn, Mary Pope Osborne transports readers back to the splendor, rich culture, and magic of traditional Japan.

MARY POPE OSBORNE is the author of the "New York Times" number one bestselling Magic Tree House series. She and her husband, writer Will Osborne (author of "Magic Tree House: The Musical"), live in northwestern Connecticut with their three dogs. Ms. Osborne is also the coauthor of the companion Magic Tree House Fact Trackers series with Will, and with her sister, Natalie Pope Boyce.

SAL MURDOCCA has illustrated more than 200 children's trade and text books. He is also a librettist for children's opera, a video artist, an avid runner, hiker, and bicyclist, and a teacher of children's illustration at the Parsons School of Design. Sal lives and works in New York with his wife, Nancy.