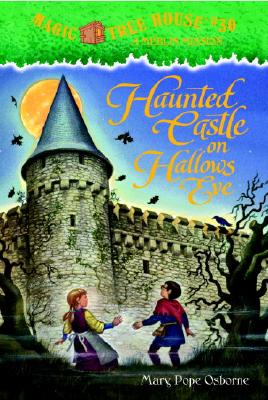 This is book number 30 in the Magic Tree House series.

The intrepid Jack and Annie are summoned once again to the fantasy realm of Camelot. There, Merlin the Magician tells them that the Stone of Destiny has been stolen. The answer to its disappearance lies within a haunted castle. With a young magician named Teddy, Jack and Annie take on the challenge in an adventure that takes them to new heights and places they couldn t even imagine
a Stepping Stone Book
MARY POPE OSBORNE is the author of the "New York Times" number one bestselling Magic Tree House series. She and her husband, writer Will Osborne (author of "Magic Tree House: The Musical"), live in northwestern Connecticut with their three dogs. Ms. Osborne is also the coauthor of the companion Magic Tree House Fact Trackers series with Will, and with her sister, Natalie Pope Boyce.

SAL MURDOCCA has illustrated more than 200 children's trade and text books. He is also a librettist for children's opera, a video artist, an avid runner, hiker, and bicyclist, and a teacher of children's illustration at the Parsons School of Design. Sal lives and works in New York with his wife, Nancy.