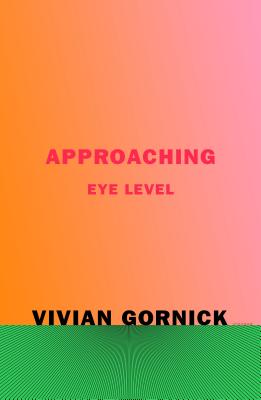 Vivian Gornick's Approaching Eye Level is a brave collection of personal essays that finds a quintessentially contemporary woman (urban, single, feminist) trying to observe herself and the world without sentiment, cynicism, or nostalgia. Whether walking along the streets of New York or teaching writing at a university, Gornick is a woman exploring her need for conversation and connection—with men and women, colleagues and strangers. She recalls her stint as a waitress in the Catskills and a failed friendship with an older woman and mentor, and reconsiders her experiences in the feminist movement, while living alone, and in marriage.

Turning her trademark sharp eye on herself, Gornick works to see her part in things—how she has both welcomed and avoided contact, and how these attempts at connections have enlivened and, at times, defeated her. First published in 1996, Approaching Eye Level is an unrelentingly honest collection of essays that finds Gornick at her best, reminding us that we can come to know ourselves only by engaging fully with the world.

Vivian Gornick's books include Approaching Eye Level, The End of The Novel of Love, and The Situation and The Story. She lives in New York City.

"It is [Gornick's] particular genius to make readers feel what they are thinking . . . Brilliant, compelling, and cohesive." —Julia Markus, Los Angeles Times

"There's more to these seven original essays than a hymn to Manhattan. There is also exploration of that most brutal and unconquerable of human sorrows, loneliness . . . Without even a flicker of self-pity, these short pieces bear rereading many times." —Publishers Weekly

"At heart this is a book not about repose but about escalating struggle—the day-to-day struggle to face down the brutality of growing loneliness, to accept the limitations of friendship and intimacy, to honor the process of becoming oneself." —Mary Hawthorne, The New York Times