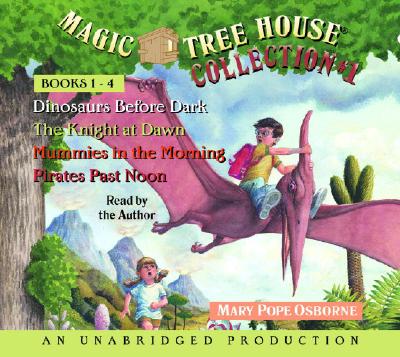 This is book number 1 in the Magic Tree House Collection series.

A collection of adventures from Jack and Annie This volume includes: Dinosaurs Before Dark
This time, Jack and Annie travel back 65 million years to a land filled with volcanoes, dinosaurs, and danger

The Knight at Dawn
Jack and Annie travel back in time to medieval England for an adventure inside a storybook castle, from feasting hall to dreadful dungeon. Mummies in the Morning
Jack and Annie find themselves whisked away to ancient Egypt, where they come face to face with a dead queen--and her 1,000-year-old mummy Pirates Past Noon
Jack and Annie are in deep trouble when the Magic Tree House whisks them back to the days of desert islands, secret maps, hidden gold--and ruthless pirates Will Jack and Annie discover a buried treasure? Will they find out the identity of the mysterious M? Or will they walk the plank?
Mary Pope Osborne grew up in the military, and by the time she was fifteen had lived in Oklahoma, Austria, Florida and four different army posts in Virginia and North Carolina. After graduating from the University of North Carolina at Chapel Hill in the early 1970's, Mary traveled all over Europe, and spent the first six weeks of her trip living in a cave on the island of Crete. She then joined up with a group of European young people and traveled in rickety vans through sixteen Asian countries, including Iraq, Iran, Afghanistan, Pakistan, India and Nepal. She was a bartender, an acting teacher, a waitress, a travel agent, a window dresser, and a medical assistant -- all before becoming an author! Now she is the author of many highly acclaimed picture books, early chapter books, middle-grade biographies, and young adult novels. In February 1993, Mary was elected the 27th president of the Author's Guild, the oldest, most established organization for writers in the United States. Mary her husband Will spilt their time between an apartment in Greenwich Village, New York and a cabin in Pennsylvania. They own a terrier named Bailey, who sleeps on the top of Mary's desk every day while she writes!