One More Time: The Best of Mike Royko (Paperback) 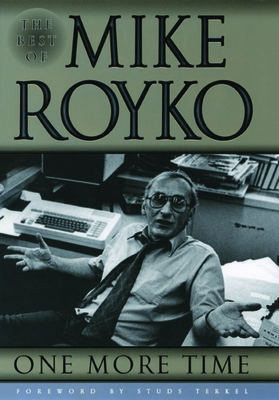 One More Time: The Best of Mike Royko (Paperback)


NOT IN STORE will arrive within 1-2 weeks
With the incisive pen of a newspaperman and the compassionate soul of a poet, Mike Royko was a Chicago institution who became, in Jimmy Breslin's words, "the best journalist of his time." Culled from 7500 columns and spanning four decades, from his early days to his last dispatch, the writings in this collection reflect a radically changing America as seen by a man whose keen sense of justice and humor never faltered. Faithful readers will find their old favorites and develop new ones, while the uninitiated have the enviable good fortune of experiencing this true American voice for the first time.

"A treasure trove lies between these covers. Royko was in a class by himself. He was a true original."—Ann Landers

"The joy of One More Time is Royko in his own words."—Mary Eileen O'Connell, New York Times Book Review

"Reading a collection of Royko's columns is even more of a pleasure than encountering them one by one, and that is a large remark for he rarely wrote a piece that failed to wake you up with his hard-earned moral wit. Three cheers for Royko!"—Norman Mailer

"This crackling collection of his own favorite columns as well as those beloved by his fans reminds us just how much we miss the gruff, compassionate voice of Mike Royko."—Jane Sumner, Dallas Morning News

"Royko was an expert at finding universal truths in parochial situations, as well as in the larger issues—war and peace, justice and injustice, wealth and poverty—he examined. Think of One More Time as one man's pungent commentary on life in these United States over the last few decades."—Booklist

"Royko was one of the most respected and admired people in the business, by readers and colleagues alike. . . . Savor [his sketches] while you can."—Jonathan Yardley, Washington Post Book World

"Book collections of columns aren't presumed to be worth reading. This one is, whether or not you care about newspapering or Chicago."—Neil Morgan, San Diego Union-Tribune

"A treasure house for journalism students, for would-be writers, for students of writing styles, for people who just like to laugh at the absurdity of the human condition or, as Studs Terkel said, for those who will later seek to learn what it was really like in the 20th century."—Georgie Anne Geyer, Washington Times

"Full of astonishments, and the greatest of these is Royko's technical mastery as a writer."—Hendrik Hertzberg, New Yorker

"A great tribute to an American original, a contrarian blessed with a sense of irony and a way with words."—Bob Minzesheimer, USA Today

"In this posthumous collection of his columns, journalist Royko displays the breezy wit that made him so beloved in the Windy City."—People

Mike Royko (1932–97) worked as a daily columnist for the Chicago Daily News, the Chicago Sun-Times, and the Chicago Tribune. His Pulitzer Prize–winning columns were syndicated in more than six hundred newspapers across the country. He is the author of Boss: Richard J. Daley of Chicago; One More Time: The Best of Mike Royko; For the Love of Mike: More of the Best of Mike Royko; and Early Royko: Up Against It in Chicago, the latter three published by the University of Chicago Press.