Road Warriors: Foreign Fighters in the Armies of Jihad (Hardcover) 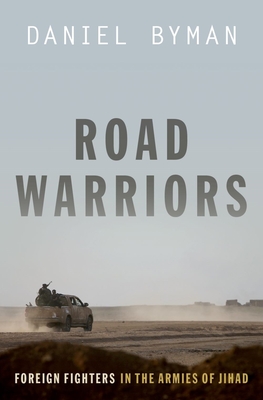 Road Warriors: Foreign Fighters in the Armies of Jihad (Hardcover)


Email or call for price.
Ever since the Soviet invasion of Afghanistan in 1979, fighters from abroad have journeyed in ever-greater numbers to conflict zones in the Muslim world to defend Islam from-in their view-infidels and apostates. The phenomenon recently reached its apogee in Syria, where the foreign fighter population quickly became larger and more diverse than in any previous conflict. In Road Warriors, Daniel Byman provides a sweeping history of the jihadist foreign fighter movement. He begins by chronicling the movement's birth in Afghanistan, its growing pains in Bosnia and Chechnya, and its emergence as a major source of terrorism in the West in the 1990s, culminating in the 9/11 attacks. Since that bloody day, the foreign fighter movement has seen major ups and downs. It rode high after the 2003 US invasion of Iraq, when the ultra-violent Al Qaeda in Iraq (AQI) attracted thousands of foreign fighters. AQI overreached, however, and suffered a crushing defeat. Demonstrating the resilience of the movement, however, AQI reemerged anew during the Syrian civil war as the Islamic State, attracting tens of thousands of fighters from around the world and spawning the bloody 2015 attacks in Paris among hundreds of other strikes. Although casualty rates are usually high, the survivors of Afghanistan, Syria, and other fields of jihad often became skilled professional warriors, going from one war to the next. Still others returned to their home countries, some to peaceful retirement but a deadly few to conduct terrorist attacks. Over time, both the United States and Europe have learned to adapt. Before 9/11, volunteers went to and fro to Afghanistan and other hotspots with little interference. Today, the United States and its allies have developed a global program to identify, arrest, and kill foreign fighters. Much remains to be done, however-jihadist ideas and networks are by now deeply embedded, even as groups such as Al Qaeda and the Islamic State rise and fall. And as Byman makes abundantly clear, the problem is not likely to go away any time soon.
Daniel Byman is a Professor at Georgetown University's School of Foreign Service and a Senior Fellow at the Center for Middle East Policy at the Brookings Institution. He is the author of A High Price, The Five Front War, and Al Qaeda, The Islamic State, and the Global Jihadist Movement: What Everyone Needs to Know.