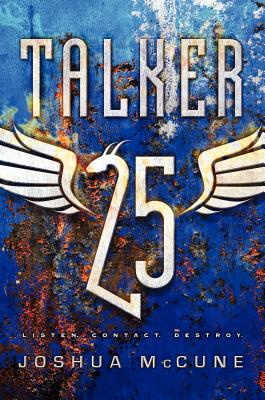 This is book number 1 in the Talker 25 series.

It's a high-school prank gone horribly wrong—sneaking onto the rez to pose next to a sleeping dragon—and now senior Melissa Callahan has become an unsuspecting pawn in a war between Man and Monster, between family and friends and the dragons she has despised her whole life. Chilling, epic, and wholly original, this debut novel imagines a North America where dragons are kept on reservations, where strict blackout rules are obeyed no matter the cost, where the highly weaponized military operates in secret, and where a gruesome television show called Kissing Dragons unites the population. Joshua McCune's debut novel offers action, adventure, fantasy, and a reimagining of popular dragon lore. "The story packs significant punch."—Publishers Weekly

Joshua McCune was born on a navy base in Rio de Janeiro, Brazil. He grew up in London and Washington, D.C., went to college in Texas, and got married in New Zealand. He worked as a telemarketer, an SAT instructor, and a robotics engineer before becoming an author. He currently lives in San Antonio, Texas, with his family, writing stories of people and places just beyond the reach of planes, trains, and automobiles (but not dragons).

“Absolutely gripping and absolutely horrifying, Talker 25 is a sort of fantasy Gulag Archipelago, an account of the stripping down of humanity under extreme duress. That McCune manages an upbeat ending is a surprising feat, but readers will be left shaken by what came before.”
— The Horn Book