Devil in the Grove: Thurgood Marshall, the Groveland Boys, and the Dawn of a New America (Hardcover) 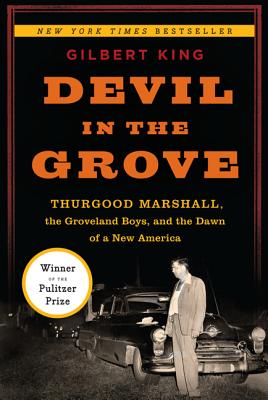 Devil in the Grove: Thurgood Marshall, the Groveland Boys, and the Dawn of a New America (Hardcover)

Devil in the Grove, winner of the Pulitzer Prize for general nonfiction, is a gripping true story of racism, murder, rape, and the law. It brings to light one of the most dramatic court cases in American history, and offers a rare and revealing portrait of Thurgood Marshall that the world has never seen before.

As Isabel Wilkerson’s The Warmth of Other Suns did for the story of America’s black migration, Gilbert King’s Devil in the Grove does for this great untold story of American legal history, a dangerous and uncertain case from the days immediately before Brown v. Board of Education in which the young civil rights attorney Marshall risked his life to defend a boy slated for the electric chair—saving him, against all odds, from being sentenced to death for a crime he did not commit.

Gilbert King has written about U.S. Supreme Court history for the New York Times and the Washington Post, and is a featured contributor to Smithsonian magazine's history blog, Past Imperfect. He is the author of The Execution of Willie Francis: Race, Murder, and the Search for Justice in the American South. He lives in New York City with his wife and two daughters.

“This story about four young black men who were accused of the rape of a white woman in Lake County, Fla., in 1949 — and what the local sheriff and his cronies, who were itching for a lynching, got away with — is a must-read, cannot-put-down history.”
— Thomas Friedman, New York Times

“A powerful and well-told drama of Southern injustice.”
— Chicago Tribune

“A compelling look at the case that forged Thurgood Marshall’s perception of himself as a crusader for civil rights. . . . King’s style [is] at once suspenseful and historically meticulous”
— Christian Science Monitor

“After reading Gilbert King’s excellent book on a little known and horrifying incident in which four young black men were rounded up and accused of raping a white woman, readers cannot help but be awed by the bravery of those who took a stand in the late 1940s and early 1950s.”
— San Francisco Chronicle

“Superb.”
— Junot Diaz, author of This Is How You Lose Her

“Recreates an important yet overlooked moment in American history with a chilling, atmospheric narrative that reads more like a Southern Gothic novel than a work of history.”
— Salon

“The story’s drama and pathos make it a page-turner, but King’s attention to detail, fresh material, and evenhanded treatment of the villains make it a worthy contribution to the history of the period, while offering valuable insight into Marshall’s work and life.”
— Publishers Weekly

“A thoroughgoing study of one of the most important civil-rights cases argued by Thurgood Marshall in dismantling Jim Crow strictures. . . . Deeply researched and superbly composed.”
— Kirkus Reviews (starred review)