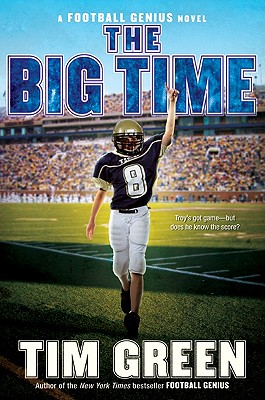 This is book number 4 in the Football Genius series.

Things couldn't be going better for Troy White. The Atlanta Falcons' football genius is at the top of his game, helping the team get to the playoffs. Agents and lawyers are knocking on his door with big-money offers for the upcoming season. And his own football team has just won the Georgia State Championship! Troy's celebrating with his friends at linebacker Seth Halloway's mansion when another lawyer comes knocking—and he says, "I think I'm your father."

In that instant, Troy's life is changed.

Powerfully charged from start to finish, this is an amazing portrayal of Troy's struggle to make his lifetime dreams of being with his father come true. Filled with page-turning excitement as a high-stakes deal increases the clash of family tension, The Big Time is an unforgettable experience.