High Tide in Tucson: Essays from Now or Never (Paperback) 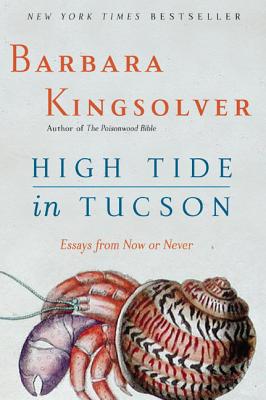 High Tide in Tucson: Essays from Now or Never (Paperback)


Email or call for price.
"There is no one quite like Barbara Kingsolver in contemporary literature," raves the Washington Post Book World, and it is right. She has been nominated three times for the ABBY award, and her critically acclaimed writings consistently enjoy spectacular commercial success as they entertain and touch her legions of loyal fans.

In High Tide in Tucson, she returnsto her familiar themes of family, community, the common good and the natural world. The title essay considers Buster, a hermit crab that accidentally stows away on Kingsolver's return trip from the Bahamas to her desert home, and turns out to have manic-depressive tendencies. Buster is running around for all he's worth -- one can only presume it's high tide in Tucson. Kingsolver brings a moral vision and refreshing sense of humor to subjects ranging from modern motherhood to the history of private property to the suspended citizenship of human beings in the Animal Kingdom.

Beautifully packaged, with original illustrations by well-known illustrator Paul Mirocha, these wise lessons on the urgent business of being alive make it a perfect gift for Kingsolver's many fans.

Barbara Kingsolver is the author of nine bestselling works of fiction, including the novels, Flight Behavior, The Lacuna, The Poisonwood Bible, Animal Dreams, and The Bean Trees, as well as books of poetry, essays, and creative nonfiction. Her work of narrative nonfiction is the enormously influential bestseller Animal, Vegetable, Miracle: A Year of Food Life. Kingsolver’s work has been translated into more than twenty languages and has earned literary awards and a devoted readership at home and abroad. She was awarded the National Humanities Medal, our country’s highest honor for service through the arts, as well as the prestigious Dayton Literary Peace Prize for her body of work. She lives with her family on a farm in southern Appalachia.